Mahler Symphony No. 1 “the Titan”

Please note I have inserted timings for moments in the symphony that I have discussed in the blog. These timings relate to the recording linked at the bottom of the page if you should wish to listen along while reading.

Around eight years ago, during one idle summer, I stumbled across a youtube video with a recording of Leonard Bernstein performing Mahler’s 1st symphony with the Vienna Philharmonic. I was immediately drawn by the symphony’s unusual nickname “the Titan”. Titanic symphonies of almost an hour length were a passion of mine at the time and so I was keen to give it a try. I sat stunned as the mysterious introduction unfolded, just as I had been when hearing the openings of Beethoven’s 9th symphony and Bruckner’s 3rd. But this was different, while in Beethoven’s 9th the first D minor theme proper had quickly emerged from the mist with a tutti outburst (as was the case more or less with Bruckner’s 3rd albeit with a good deal less haste), the introduction of this symphony seemed to remain in a kind of musical stasis for much longer. When eventually the first theme did surface I was faintly horrified. It seemed to me to be a tune of such absurd banality that I was stunned. How could this Mahler follow something so sublime with a theme like that?! I turned the video off immediately. Over the years I have learnt to appreciate and indeed love this contrast of the sublime and banal that is so typical of Mahler’s music, but it has been a long process. Let us take a closer look and see if we can re-evaluate things from the beginning.

What are the special ingredients of this hushed opening that so attracted me on that occasion. The first element is an A natural drone spanning several octaves (the same note played very quietly, moving up by an octave in a glissando), about as close as one can get to a kind of musical quietude (0:05 to 0:11 of track 1). This drone is soon joined by the second element, an interval of a descending fourth played in a call and response type fashion by the woodwinds, and a little later forming a short motif based on this descending interval (0:11 to 0:34 of track 1). This is then joined by a fanfare motif first played by the clarinets (0:35 – 0:43 of track 1), then eventually by muted trumpets (Mahler calls for the latter to be played in the distance as if they are heard far away) (1:07 – 1:14 of track 1). The clarinet imitates the call of a cuckoo but with a slight twist, unlike in nature the interval is here once again a descending fourth (1.28 of track 1). We now have a beautiful chorale theme in the horns that sounds full of innocence like the new morn (1.33 – 1.49 of track 1). From the musical void we are beginning to hear stirrings of life. A chromatic bass-line brings the first signs of any real tension to the music urging it towards a new direction (2:21 of track 1). Soon the “banal” theme emerges, but listen closely to how it starts with that same interval of a descending fourth that has been so prominent thus far in the music (3:02 of track 1). The theme has been prepared all along.

The question we may well ask is what does this strange and quiet introduction signify? Mahler gives us a clue in the score, he marks this section “Naturlaut” (sound of nature). In other words the music is conveying the hushed sounds of nature at its most tranquil, the impression one gets when alone in a wood perhaps. And what about the meaning of the main theme? Here, we also have some indication from Mahler. The melody is derived from the song “Ging Heut’ Morgen über’s Feld” (which describes the happy sensations upon observing the natural world) from Mahler’s song-cycle “Lieder eines fahrenden Gesellen” (“Songs of a Wayfarer”). This theme seems to represent nature, or a view of nature, at its most joyously innocent. The contrast was necessary: Mahler wanted to represent both views of the natural world, the sublime and the naïve. With all the musical elements in place Mahler now draws both from the introduction’s motifs and the mono-thematic exposition to construct a movement in unconventional sonata form. Close attention should be paid to the role the descending bass-line motif plays in injecting drama and tension into the movement, and the role of the fanfare motif in overcoming that tension. 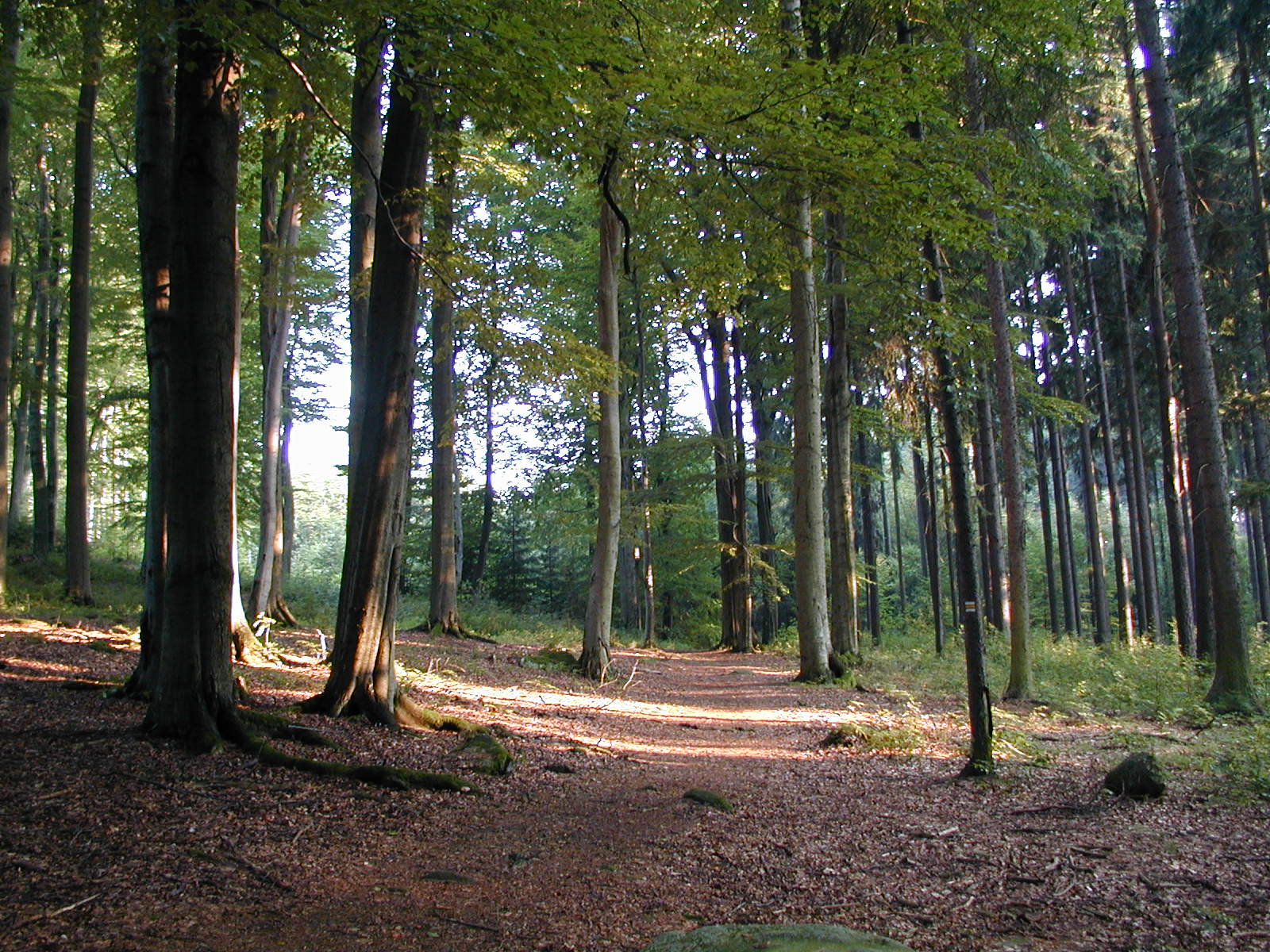 The second movement begins with a Ländler, the country cousin of the Viennese Waltz, beloved throughout the Habsburg lands including in Mahler’s own native Bohemia. This rustic music has a surprisingly raucous atmosphere for the concert hall. Mahler would certainly have heard music like this as a boy in his father’s tavern in Iglau (modern day Jihlava). The horns are required to use a technique called “stopped horn” whereby the player blocks the bell of the instrument with their hand creating a veritably gnarly and uncouth sound. The central trio section is more elegant and intimate in tone and provides a respite from the stomping jollity of the peasant dance in the outer sections (2:50 – 5:36 of track 2). One more contrast in this symphony of contrasts.

If I had been patient enough to listen past the opening movement on that first occasion, there is no doubt I would have been shocked further still by the third movement, one of Mahler’s most unique creations. It begins with an eery funeral march which employs the tune of the popular round “Frère Jacques” refashioned in the minor mode (Mahler marks it “Bruder Martin” in the score). Here, then is a yet more bizarre contrast, nursery music used to create a solemn funeral march. The strangeness is intensified by the choice to introduce the melody with a solo double bass – an unusual instrument to say the least for a solo (0:10 of track 3). Later, the music gets weirder, sounding to many audiences like a Kletzmer band (2:27 of track 3). It seems unlikely that Mahler was actually channelling Kletzmer here as he had almost certainly not heard such music at this point in his life and this part of the movement probably owes much more to the Bohemian folk music he would have heard as a child. One thing is for certain though, this sped-up almost grotesque folk music provides for a very odd juxtaposition to the solemnness of the opening march.

Mahler explained that the movement had been partially inspired by a famous engraving known as “the Huntsman’s Funeral” by Mortiz von Schwind. The engraving depicts a torchlit funeral procession of forest animals carrying the body of their deceased enemy the hunter. The beasts appear to celebrate his demise with an unrestrained whimsy that gives the engraving a sharply ironic air. It is that same juxtaposition of earthy revelry and themes of death and loss that permeates the main music of the third movement. A lyrical contrasting section is set against this morbid humour (5:20 – 7:19 of track 3). It is based on music from the fourth stanza of another of Mahler’s songs “Lieder eines fahrenden Gesellen”: “Die Zwei Bluen Augen”. The text of the song describes how the protagonist and spurned lover has set out into the wide world and eventually found comfort asleep under a Linden tree. As with Schubert’s “der Lindenbaum”, we sense that there is a longing for the consolations that might come through death and an end to earthly miseries.

The final movement is the dramatic linchpin of the whole symphony. Mahler gave the movement the title “Dall’ Inferno al Paradiso” (“from the Inferno to Paradise”) and it appears to represent a battle between these two oppositional forces for one man’s soul. The movement begins abruptly with a cymbal clash followed by an orchestral outburst that Mahler described as the “outcry of a deeply wounded heart”. There ensues are short introduction with several motifs taken from Liszt’s Dante symphony, for example the motif first heard at (0:09 of track 4) is based on Liszt’s crux fidelis motif (used in the Dante symphony and elsewhere by Liszt), though Mahler has modified the intervals so that it conforms to the minor key. Another motif taken from Liszt’s Dante symphony follows based on chromatically descending triplets (0:11 of track 4). Out of this infernal introduction arrives a terrifying march-like main theme, its first four notes taken from the minor-version crux fidelis motif (1:06 of track 4).

Mahler at the time of writing his First Symphony

This first theme is developed, hogging the stage like a rude bully, before finally culminating in swelling sounds in the brass and sneers based on the descending triplets (2:41 – 3:16 of track 4). A transition section follows that leads into a surprisingly beautiful song-like second theme that in turn builds to a sumptuous outpouring of emotion (3:17 – 5:48 of track 4). Does this theme perhaps represent the divine love that must necessarily save us from our ruin? Whatever the case may be we are not allowed to rest too soon, the exposition closes with music from the first movement’s introduction now combined with the minor-version crux fidelis motif and the descending triplets motif heralding a return to the stormy beginnings of the finale (5:49 of track 4).

The development begins dramatically with a combination of the minor-version crux fidelis motif and another inferno theme from Liszt’s Dante symphony (6:13 of track 4). Yet out of the maelstrom emerges hope, with fanfares reminiscent of the first movement returning followed by the crux fidelis motif now in the major mode with its original intervals restored and combined with an adapted version of the grail theme from Wagner’s Parsifal (6:58 – 7:14 of track 4). The trumpets attempt to mount a chorale-like theme which is interrupted by a return to the minor key and the tumult of the beginning (7:15 – 7:25 of track 4). The theme of victory first heard at (7:01 of track 4), however, soon emerges again but now fortissimo and what is more it leads to a surprising and spine-tingling modulation to D major (the key by which Mahler is to represent paradise) (8:25 – 8:39 of track 4). The chorale-theme returns resplendently (8:40 of track 4), its source of inspiration being the theme first heard at (0:25 of track 1) at the very start of the symphony based on descending fourths. From 8:51 of track 4 try singing “and he shall reign for ever and ever” to the melody and you might find yourself also believing Haendel’s Hallelujah chorus had some influence here too.

Motifs from the first movement now return at the conclusion of the development like memories of a past innocence fast receding but not forgotten (9:46 of track 4). They are heard, however, alongside motifs from the finale such as the devilish descending triplets motif. From memories of youth, we return to the song-like second theme which mounts to a beautiful though almost heart-breaking climax (11:33 – 13:14 of track 4). The dreaded march-like theme comes back and seems at first in danger of gaining momentum but it soon dissolves preparing a recall of the climatic passage which came near the conclusion of the first movement (13:15 – 15:15 of track 4). Fanfares herald the return of the motif of victory, a modulation to D-major and the finally the chorale-theme that leads us on triumphantly to a glorious conclusion (15:16).

And so a symphony of contrasts, of both sublime and naïve elements, the beautiful and the grotesque, ends with the greatest contrast of them all: that between heaven and hell, with heaven victorious at the last.