Note: I have made references throughout this blog to timings for certain highlighted moments (e.g 0:03 of track 1) – this is in relation to a recording of the work I will provide a link to below (follow along should you so desire).

On the 30th December 1884 , in the world-famous Leipzig Gewandhaus, the premier of Anton Bruckner’s 7th symphony was received with rapturous applause. At the age of 60 Bruckner had now experienced his first taste of success with an audience. But why had it taken so long for this modest but industrious Upper Austrian to find favour with the public? One reason was simply that Bruckner had started surprisingly late in life to compose large-scale works, he had not approached the genre of the symphony until near the end of his fourth decade on this earth. The other perhaps more important facet was that he had found himself, quite by accident, at the fore of central Europe’s raging musical conflict between the supporters of Johannes Brahms and the supporters of Richard Wagner. At first glance, the tremendously modest Bruckner, who had little to no literary interests would seem an unlikely member of the Wagnerian camp, but nonetheless, that was the group he had found himself pigeonholed into. In fairness, Bruckner had gained a deep appreciation for Wagner’s music since the early 1860s and was known to have practically worshipped the older composer. What made Bruckner more offensive to the other side, though, was that he had had the temerity to compose abstract symphonies, and what’s more to compose them in Vienna, where Brahms, and perhaps more importantly the critic Eduard Hanlick resided and reigned supreme. Brahms had derided Bruckner’s symphonies as musical ‘Boa constrictors’, but Hanslick was the more abusive, orchestrating venomous attacks in the Viennese press. It goes without saying that the conservative orchestras and audiences of Vienna were by no means receptive to Bruckner’s symphonies which were both long and in their mind lacking proper rigour. 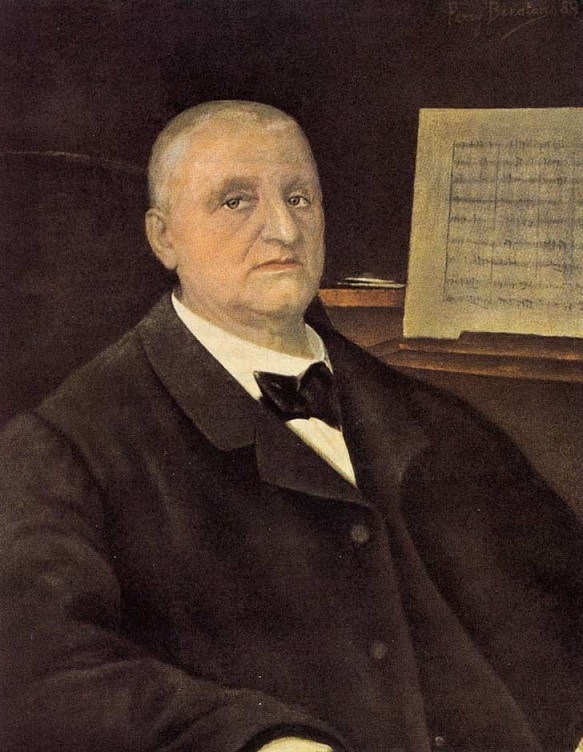 The audience that heard Bruckner’s 7th symphony for the first time in Leipzig, however, was far more open to this music, and Bruckner had at last found a talented and sympathetic interpreter in the conductor Arthur Nikisch. It was a captivating success from the first bars onward. As with most of Bruckner’s symphonies, the opening is presented with utmost mystery, as a long arching and searching theme takes its course over tremolo strings. This theme had apparently come to Bruckner in a dream, in which his mentor from his Linz days, Ignaz Dorn, had played the melody on a viola promising the composer that it would bring him ‘success’. One of the main characteristics of this theme is that it modulates from the home key (or tonic), e major, to the dominant, b major. This is in part what give it its searching quality. It also sets up what is essentially the slow drama of the entire movement, the takeover of b major from the tonic and the painstaking process whereby the home key reasserts its position. In a truly ground-breaking manner, Bruckner will delay this resolution until the coda. 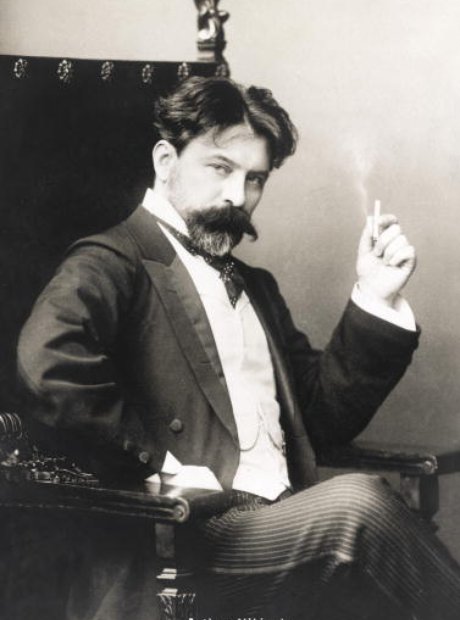 The first theme slips back to the tonic, for a restatement which again modulates to the dominant (1:22 of track 1). The second subject which starts in b major, wanders through several keys, generating a strong sense of forward movement (2:46 of track 1). It is important to bear in mind that although Bruckner’s music has a tendency to be slow, and interpretations have a tendency to be even slower, there is still often a feeling of steady forward propulsion. The music builds to a climax resolving on the key of b minor (a dark and solemn key). A theme with a new rhythm now begins in b minor, passing through several keys til it leads to a fanfare and the music dies away softly in b major (5:51 – 7:44 of track 1). This comprises effectively the exposition (the section in which the themes are first presented), and now it is time for the development. Bruckner inverts many of the movement’s themes for this section (this means the ascending intervals of the melody become descending intervals and vice versa), presenting for example, a beautiful inversion of the second subject played cantabile by the cellos (9:16 of track 1). A crisis point is reached in which the inverted version of the opening theme is presented menacingly in c minor (11:18 of track 1). Effectively any strict recapitulation in which the opening material is presented securely in the tonic, has now been severely undermined by this outburst so near the end of the development.

A traditional recapitulation was not in fact what Bruckner had in mind at all. Although, we do eventually hear the main theme in e major, and although this is felt by the listener as the home-key, it is far from a secure and solid resolution (13:06 of track 1). Again the theme modulates to b minor, which leads to what is the greatest crisis in the movement, as the music floats into dark and mysterious harmonies, beautifully orchestrated (14:13 of track 1). Bruckner’s wandering second subject again reaches a climax, but this time we arrive with the new rhythmic theme in g major, not the dominant, which provides the impetus to bring about the long-delayed resolution of this movement as the key of b has lost its pre-eminence (16:58 of track 1). Again the music passes through several keys, before it settles down for what is without a doubt one of the greatest codas in the entire symphonic repertoire. On a pedal point (a technique originating in organ music) in the bass over which the rest of the orchestra plays wandering harmonies, the music rises to a crescendo (18:25 of track 1 onward). The music gradually resolves to e major for what is, at last, the resolution we have been looking for throughout the entire movement, accompanied by glorious fanfares in the brass.

The second movement is marked adagio. Bruckner’s adagios are often seen as being at the heart of his symphonies, and this is especially true here. The seventh’s adagio is probably one of the greatest slow movements of any symphony, let alone any Bruckner symphony. It begins in the relative minor to the home key, C-sharp minor (a key hitherto not touched upon), and with a theme of sombre feeling (first heard at 0:01 of track 2). Apparently Bruckner was inspired to compose this theme because he realised that Wagner was not far from his dying day. Wagner was in fact to die during the period in which Bruckner composed the symphony. The movement’s structure is a set of variations upon two themes. The second which begins in f-sharp (first heard at 4:57 of track 2), has been described beautifully by Bruckner expert and conductor Georg Tinter as:

The adagio utilises 4 Wagner tubas, an instrument designed to be used in Wagner’s Ring Cycle. Half way through the movement during the first recurrence of the first theme, the music reaches a climax in g major, which prepares the audience for the movement’s most important moment later on. That in turn is reached following a long crescendo, which climaxes in C-major accompanied by one of music’s most famous cymbal clashes, supported by a triangle (19:15 of track 2). This was apparently suggested as an addition by Nikisch, a change Bruckner agreed to. In the manuscript this addition is marked as invalid, but not in Bruckner’s writing. The fact that a similar passage is accompanied by a cymbal clash in the adagio of the 8th symphony suggests that Bruckner did want to retain this part for percussion in the 7th contrary to the manuscript’s direction. Some performances will include this use of percussion, others not. After this climax the music dies away and ends in funeral character. 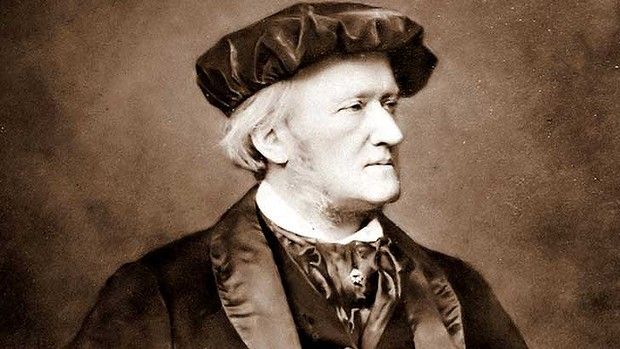 The third movement scherzo is based on a driving dance theme in A minor with an octave leap (first heard at 0:02 of track 3), while the contrasting trio section has a slower tempo (3:25 of track 3). The latter is full of beautiful orchestration in the brass and woodwinds. Overall, this movement is the perfect foil for the immensely moving and sombre second movement. The finale is an odd mixture of the sublime and the light-hearted, it begins with a theme of jaunty character which has some resemblance to the opening movement’s first theme, and which is again accompanied by tremolo strings (0:01 of track 4). The second subject of the finale is a more serious chorale theme (1:00 of track 4), while the third subject takes up a more menacing mood in the minor mode (2:56 of track 4). In the recapitulation, the themes are presented in reverse order (just one of the factors that make this movement difficult to define in terms of form)! The coda features the jaunty theme alongside the opening theme of the symphony, climaxing with an E-major chord ablaze with glory (10:49 of track 4 onward)!

With this ending, Bruckner had capped off a work which would bring him fame and renown for the first time in his compositional career. In one of the great ironies of music history, the timid, shy, and deeply conservative catholic composer, with an awed reverence for music of the past, would become the new poster-child for progressive modern music. Anton Bruckner, the peasant from upper Austria, had secured his place in the great pantheon of German music, a position from which not even Hanslick could dislodge him. In some ways it is not exactly surprising that it was the 7th symphony that brought him this recognition, its lyrical and moving themes continue to have charms for audiences to this day. The long-delayed resolutions and slowly built climaxes contained within will forever deserve our special attention, representative as they are of that most Brucknerian quality: his sacred patience.

Here is the recording upon which the timings are based, you are more than welcome to choose your own performance but please note the timings could be very different if you do: