Note: I have made references throughout this blog to timings for certain highlighted moments (e.g 0:03 of track 1) – this is in relation to a recording of the work I will provide a link to below (follow along should you so desire).

Places can store up memories for us, which when we return come flooding back to us. The region situated along the banks of the Rhine must have been just such a place for the composer Johannes Brahms. It was there in October 1853 that he first made the acquaintance of Robert and Clara Schumann at their Düsseldorf home. Robert who was deeply impressed by the young man’s music, would soon lionise Brahms in a famous article that championed him as the next great composer in German music. But sadly things did not remain rosy for long. In February 1854 Robert would throw himself off a bridge into the Rhine in a desperate suicide attempt. As a result he was committed to an asylum and would die there just two years later in 1856. Meanwhile, Brahms and Clara would find themselves falling hopelessly in love as they comforted each other in the wake of this tragedy. Even so, following Robert’s funeral, Brahms fled the scene and left the newly widowed Clara to tend to her young family alone. Ultimately, marriage scared Brahms who would become a perennial bachelor, he must have also felt conflicted because of his friendship with Robert.*

When Brahms returned to the banks of the Rhine to stay at Wiesbaden nearly 30 years later, after celebrating his 50th birthday, it is easy to imagine these difficult and painful memories would once again be brought to the fore of his mind. There, over just a matter of three months, he would complete his third symphony, a work of consummate formal brilliance, yet also an intensely personal work. The symphony would begin with a kind of musical motto with resonance for Brahms and his circle. Musical mottoes (used to represent people) were common at that time, Brahms’ friend and fellow bachelor Joseph Joachim, for example, had the motto of the notes F – A – E (Frei Aber Einsam – free but lonely – in other words single but lonely). Indeed, Brahms, Robert Schumann, and Albert Dietrich had each composed a movement on the basis of this motto for what would become the F-A-E violin sonata dedicated to Joachim. Brahms, being the able ironist that he was, took Joachim’s personal motto and created his own: F-A-F (Frei Aber Froh – free but happy). It is with this motto (albeit with the A moved a semi-tone lower to A flat, creating a minor interval) that the symphony would begin (0:02 – 0:08 of track 1).

This motto is of immense significance for the symphony, it will recur throughout the movement in many different guises, and will serve as the germinating idea for many of the themes of this symphony. Its first recurrence follows immediately as it forms the bass line underneath which the first theme proper is built (listen out for it in the double basses and brass). The first theme, in fact, begins on the third note of the motto and so a close connection is established from the beginning (0:08 – 0:30 of track 1). The theme itself has a striking resemblance to a phrase from the middle of the first movement of Robert Schumann’s famous Rhenish (or Rheinische) symphony composed as a tribute to the Rhine and the Rhineland region (7:40 – 7:48 of Schumann track). Strictly, speaking Schumann’s theme is a varied version of his movement’s main theme, but Brahms seems to have cottoned onto this version and used it in his symphony, adding to it a passionate weight. By doing so he was referencing Schumann and the memory of his departed friend in this work which had already begun with the Brahms’ own personal motto. The theme switches from major to minor from measure to measure, a technique learnt from Franz Schubert, which creates ambiguity and tension in the music. 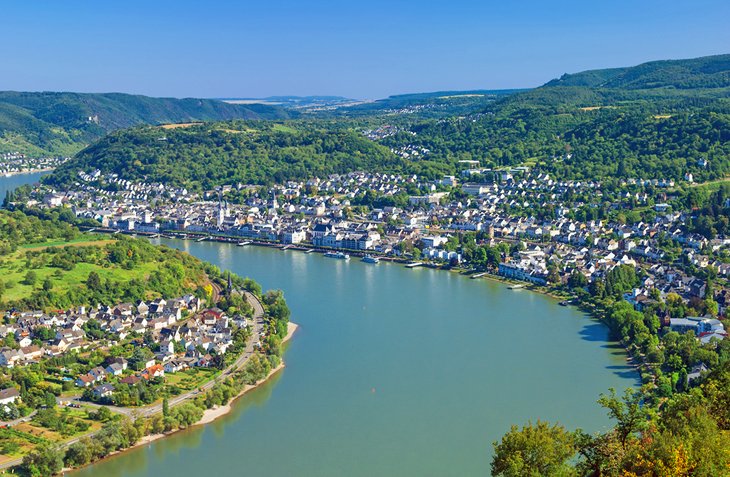 Picture of the Rhine valley

The second theme, which is in A-flat major (1:24 of track 1 onward), follows a transition in which the orchestra is pared down, so that when we arrive at this theme it almost has a chamber music feel. It sounds like the sort of  rustic melody Brahms might have heard while conversing with friends in one of the many cafes of Vienna. Brahms does elaborate and develop this simple theme in the exposition but notice the extraordinary way he transforms the melody in the development section, now in the minor and taking on a far darker character (6:32 of track 1 onward). The drama of this part is enhanced by a transitional section, which takes us from the repeat of the exposition to the development, filled with syncopated rhythms typical of Brahms’ music (5:47 -6:31 of track 1). Just before the recapitulation we are provided with a broad almost elegaic version of the opening motto by the solo horn reflecting the oft-spoken autumnal feel of this symphony (7:26 -7:37 of track 1). Following the recapitulation, the music gently subsides to a quiet peaceful conclusion in the coda. We hear at the end of the movement the opening motto followed by the first theme, now combined as if they were one theme.

The second movement begins with another simple folk melody in the clarinet with the orchestra providing an accompaniment (0:01 of track 2 onward). Listen out for how the clarinet and orchestra each hint at the opening Frei Aber Froh motto. Clara described this part of the symphony as a “pure idyll” in a letter to Brahms. The second theme has a greater intensity and melancholy about it, suggesting as always with Brahms, that not all is mere bliss, and it leads to a rather mysterious chromatic passage (2:25 – 3:40 of track 2). The recapitulation follows on from the development so seamlessly that is easy for the likes of me to miss it (4:58 of track 2). In this revised sonata form movement, the first theme is heard again in the recapitulation (as is the chromatic passage) but not the second. This theme will in fact be kept back for later. Once again the movement ends quietly and mysteriously.

It had become common since Beethoven for the third movement of a symphony to be a scherzo, that is a quick and sometimes jocund movement of dance music in 3/4 time. This style of movement did not suit Brahms’ temperament, and after composing works such as the piano quintet in F minor (which has a marvellous scherzo), he favoured movements he termed intermezzi which were generally slower and more contemplative in character. Although this third movement only has as description the tempo marking ‘Poco Allegretto’, it has strong a resemblance to movements from other works termed intermezzi. The opening melody is one of the most beautiful in all of music and should be brought up immediately whenever any swine tries to claim Brahms was not a gifted melodist. A favourite passage of mine is when the solo horn takes up the melody (3:39 of track 3 onward). The horn or Waldhorn was intimately associated in German culture with the forest and therefore with mystery and Romanticism. Throughout, this movement there emanates a supremely autumnal atmosphere. For the third time in this symphony there is a quiet conclusion.

The finale begins with an opening theme which is heard first in the Phrygian mode before its accompaniment reveals it to be in F minor (0:01 – 0:31 of track 4). This theme leads to a return of the second subject from the second movement but now in the form of a brooding chorale, or hymn-tune (0:32 of track 4 onward). The return of the movement’s opening theme in tumultuous fashion follows which leads to a transition to the second subject heard in the cellos and horns (0:55 – 1:29 of track 4). This second heroic theme in the major acts as a contrast to the rest of the movement’s material which for the most part is dark and intense (1:30 of track 4 onward). Indeed, it is soon followed by a new dramatic theme which returns the movement to its predominantly storm-filled character (1:57 of track 4 onward). The opening theme comes back once again this time quietly in the woodwinds for the start of what forms the development section of this modified sonata form movement (2:54 of track 4 onward). As the opening theme grows quieter, the chorale theme returns in an eruption of sound, which is followed by a recap of the other themes including the heroic second theme and the dramatic third theme (3:59 of track 4 onward). The movement’s coda begins with the opening melody which slowly unwinds and modulates to F major (6:36 of track 4 onward). Throughout, in the mystical quality of its orchestration, this coda reminds me of the Forest Murmurs from Wagner’s Siegfried (6:36 – 9:08 of track 4). The opening Frei-Aber-Froh musical motto is heard several times once again, followed by the chorale theme which has now become broad and majestic. Afterwards, the Frei-Aber-Froh motif is combined with the opening theme from this movement. Finally, the impassioned Rhine theme derived from Schumann returns now far less intense and in a mesmerising fashion with shimmering strings, concluding the symphony pianissimo.

How ultimately are we to make sense of this work? One view is that this is Brahms at his most formally terse and concise. It is the briefest of his symphonies, with each movement being the same length, and each being closely interrelated thematically. Another valid view, is that this is Brahms at his most personal, referencing himself in the opening musical motto and his mentor Robert Schumann in the first movement’s opening theme. Then, there is the fact that each movement ends quietly, which was totally unique for the time. I began this blog with a discussion of the dramatic events which had moulded Brahms’ early manhood and which took place almost thirty years before the composition of the symphony. Those memories must surely have been on his  mind when he wrote this symphony at Wiesbaden, with the Rhine so nearby. One possible speculative interpretation is to view in the final peaceful resolution of this work a kind of personal resolution for Brahms, a putting away of memories that had haunted him since he first left the Rhineland. Whatever the case may be,  the manner with which the finale ends is exceptional and highly moving. Leonard Bernstein spoke of this ending as ‘magically healing’ and a moment of ‘sweet resolution and repose’. Indeed, in the mystical manner with which this symphony concludes I am reminded of these famous lines by Prospero from Shakespeare’s The Tempest:

Our revels now are ended. These our actors,
As I foretold you, were all spirits and
Are melted into air, into thin air:
And, like the baseless fabric of this vision,
The cloud-capp’d towers, the gorgeous palaces,
The solemn temples, the great globe itself,
Ye all which it inherit, shall dissolve
And, like this insubstantial pageant faded,
Leave not a rack behind. We are such stuff
As dreams are made on, and our little life
Is rounded with a sleep.

Here is the recording upon which the timings are based, you are more than welcome to choose your own performance but please note the timings could be very different if you do:

* Brahms and Clara would, nevertheless, continue a passionate friendship over a long period of regular correspondence.