Choosing Rattus as album of the month this month was bold. Producing a review for this masterwork is rather very difficult. You would not believe it from first listening but this album was released in 1977, making it 43 years old at the time of writing. While the likes of ABBA, Fleetwood Mac and Barbara Streisand dominated the charts, the Stranglers thought they would unleash a torrent of dark punk energy on the world. And by gum, it worked.

With Hugh Cornwell on vocals and guitar; Dave Greenfield (RIP) on keyboard and vocals; Jet Black on Drums and Jean Jaques Burnel on Bass Guitar, this album features the classic old school Stranglers line up. Before I go into the music, I wanted to mention Dave Greenfield. He passed away, sadly, in early May 2020. This post is as much a tribute to The Stranglers as it is to the genius that was Dave Greenfield. I won’t claim to be an expert, and neither does The Guardian (who misattribute his death to COVID, when this was only a small factor in his cause of death, in typical mainstream media style), but they have written an excellent Obituary, which I encourage you to read.

Its distinctive combination of lyrical anger and organ-driven sleaze was both deeply confrontational and musically accomplished. This was an album that found considerable success by crossing barriers: those older music fans who found the minimalism of The Damned or the Ramones a little too off-putting could deal with the snaking arabesques of Hugh Cornwell’s guitar solos, Jean Jacques Burnel’s growling Fender Precision bass or Dave Greenfield’s frankly psychedelic organ arpeggios. Oh, and some great tunes. BBC Music

As well you know, I live and breathe music. I grew up with The Stranglers, despite being a teenager in the early 2010s. My Great Grandfather moved home from Haxby to Harrogate in North Yorkshire when I was about 14. Downsizing does require some sacrifices, as you can imagine. I got the old Sharp CMS 150 Hi-Fi which didn’t make the cut. It looked like the photograph below, with equally big speakers. This was my introduction to vinyl, as well as tapes CDs and FM radio (mostly BBC Radio 3 in those days, before I tired of the nasal pomposity and unattainable scope of knowledge they propagate). The first LP I heard was Men At Work, Business As Usual. Of course I wasn’t aware that there was a difference between 33RPM and 45RPM. I played this first LP on the latter setting and thought Ivan Doroschuk had taken rather a heavy dose of helium. 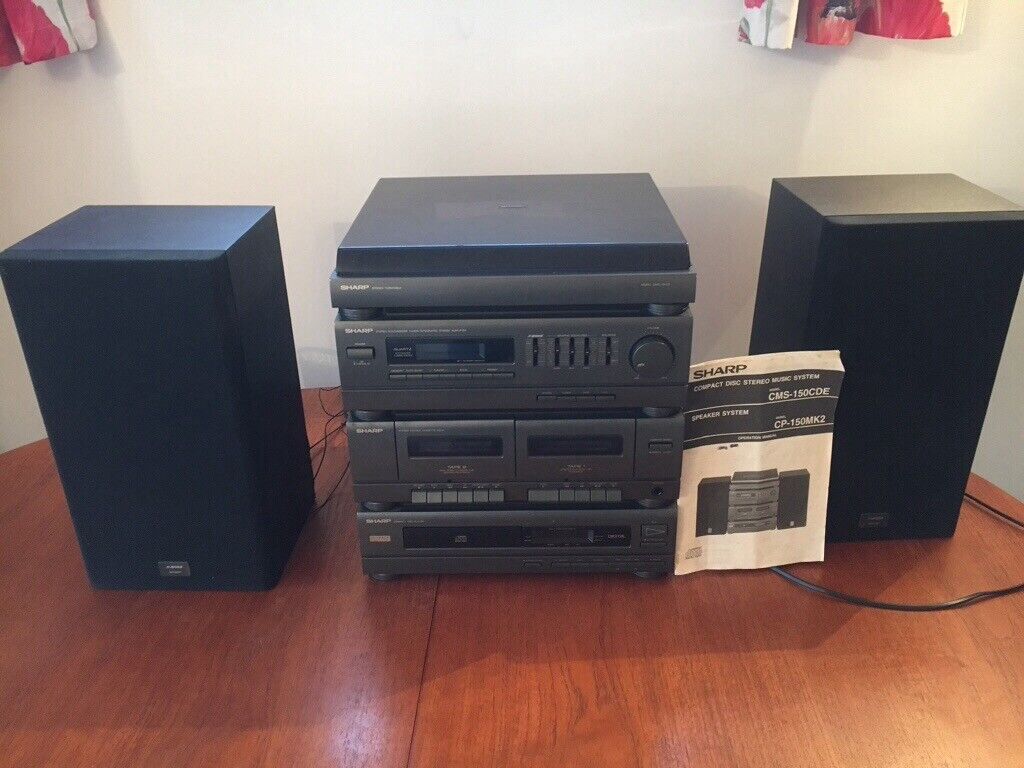 Eventually I riffled through Father’s vinyl collection and landed on Rattus Norvegicus. My understanding of the concept of music expanded irretrievably from then on.

You must understand that when your introduction to punk and rock starts with the album that features Down in the Sewer, nothing can ever be the same.

On the Rattus picture sleeve, French bassist Jean Jaques Burnel affected a lean, asexual allure that hinted at Roxy and Bowie: next to him, unfashionably bearded keyboard player Dave Greenfield could have been touring with heavy/prog rockers Uriah Heep. Behind them, drummer Jet Black (unfashionably old for punk at 35) and guitarist and vocalist Hugh Cornwell loomed like two faces who wouldn’t have been out of place working a London crime firm. On this form, The Stranglers skilfully implied danger rather than bellowed it. We Are Cult

Now to the music: the opening number, Sometimes, immediately puts the Stranglers in sharp contrast to their punk contemporaries by demonstrating that they can actually play their instruments. Immediately all three main instruments shine in their own light. The keyboard in particular is very impressive here. The lyricism is pure punk, spitting out anger leading up to a stunning solo from Cornwell. Please take note of the production value here and throughout this album. These are flawlessly produced tracks with seamless transitions between motifs and riffs, with a beautifully balanced sound where no instrument walks over another.

While IV [Rattus] may be ill-tempered and downright ugly in its misogyny at times, its anything but dull. Where most Punk bands were ranting against society, the Stranglers focused on inner conflict. IV is a frustrated, angry tug of war of sex, conscience and low self-esteem. It’s downright perverse in its sarcasm and nihilism. In short, it’s not a very pleasant place to be but like anything with a dark allure, you can’t resist going down that alley once it presents itself. Soundlab

Goodbye Toulouse used to be one of my favourite Stranglers tracks. It tells the story of Nostradamus’ prediction of the downfall of the city. I’m so drawn to a weird keyboard wizardry that Greenfield unleashes on us. It reminds me of Waltz in Black and the more choice experimental tracks on Side 2 of The Raven, which I love. One of Top Ten tracks ever is Lilies and Remains by Bauhaus – which is reminiscent of this Otherness which the Stranglers are so known for. Goodbye Toulouse itself features a relentless bass-line and, again, flawless production and balance.

London Lady (Why did you lay me? // Your head is crowded with the names you’ve hounded) is pure punk rock late 70s misogyny. If you’re revolted by this, good for you. Keep it up. I would encourage music listeners to separate the ignorance of times gone by from the merits of the musicality of a piece or track. Watch out for the cascading guitar in this track, which is just awesome.

‘London Lady’ follows and is a nasty bit of derision aimed at a female rock journalist […] Malicious and vengeful as it is, it’s all spat out with so much self-loathing, you’re inclined to think Cornwell may have richly deserved the slight that’s gotten under his skin.  In other words, he makes no pretence of being any better than the bile he’s hurling. Soundlab

Princess of the Streets tells the story of a Regina George-like pack leader who is out to cause trouble. This features extraordinary bass and keyboard with solos flawlessly woven in.

Hanging Around remains one of my top tracks by the Stranglers. The characterisation in the lyrics is superlative (Big girl in the red dress // She’s just trying to impress us. Standing in the Coleherne // With the leather all around me). This is a reflective punk piece which takes pot shots at religion and the London club scene life. The solos are incredible.

Peaches (oh boy) doesn’t really need to be spoken about I think. It’s an excellent track and speaks to the typical beach gawking pervert and the perceived enormity of female bottoms. There is innuendo and plenty of lechery. This is overplayed in my opinion. Every band needs their most popular track but it is seldom their best musically. One should not trust the music taste of the general public.

Grip was my previous top Stranglers track (before Down in the Sewer and Walk On By changed my life). This track is a sharp contrast to the poppy stylings of the previous tracks. In my notes for this review, I have underlined ‘keyboard’ with a choice expletive. Greenfield is truly in his element here.

Ugly is once again a terribly misogynistic track which epitomises this dark punk rock energy. It is filled with vitriol and anger at the hideous subject but also at themselves for feeling this way. The synth and lyrics really stand out here (I would like to see a passionate // film between // the two ugliest // people in the world // when I say ugly, I don’t mean rough looking // I mean hideous)

Now, Down in the Sewer, where to begin? In my estimation this is inspired by the Doors’ Light My Fire. Indeed a lot of Greenfield’s keyboard stylings can be seen to stem from the wonderful musical stylings of Ray Manzarek. This track is an 8 minute masterpiece and is undoubtedly the crowning jewel of this album, if not the entire Stranglers repertoire. The lyricism, the central riff which holds the piece together, the cycling through solos – everything in this piece is aimed at letting the audience know who the Stranglers are and how good they are.

I wish there were some way to describe the excellence of this track. It’s so suffused in brilliance that I find it difficult to talk about. The keyboard, synth, drums and guitar are all flawless and follow one another seamlessly (into the sewer?) into an insane crescendoing euphoric ending. The end bass is magisterial and reminiscent of the earlier bass during the first solo cycle. One reviewer noted the end of this track is like 1000 Rattus Norvegicus running all over your speakers. The track comes full circle and ends leaving you feeling breathless, needing a few minutes to readjust.

Rattus Norvegicus is the kind of album that will leave you feeling awed at the power of music and the sheer talent of those performing it. It is a jewel in the crown of punk and a deciding factor in late 70s English musical brilliance. I am constantly amazed by this album. It is over 40 years old but has not lost one note of its excellence. Why has this album survived? I believe in part due to the novel genius it displays. That spark of individual inspiration is so rare in music. Often one can dissect a new band using what came before. With the Stranglers, it is more difficult to see this. One can find their roots with ease but they branched out so far from them that they have become seminal artists themselves.